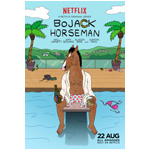 ‘BoJack’ Will Be Back in the Saddle for Second Season

Mere days — just enough for subscribers to get a good bing-watch in — Netflix has renewed animated comedy BoJack Horseman for a second season of 12 episodes, according to The Hollywood Reporter. Produced by Michael Eisner’s Tornante Company and ShadowMachine Films, the 2D series is Netflix’s first original animated series aimed at adults.