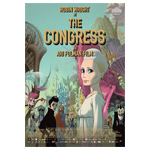 The film, which played at this year’s Cannes, stars Robin Wright as herself as she takes one final job: preserving her digital likeness for a future Hollywood in exchange for the resources to care for her ill son. Twenty years later, under the creative vision of the studio’s head animator, played by Jon Hamm, Wright’s digital double rises to immortal stardom. With her contract expiring, she is invited to take part in “The Congress” convention as she makes her comeback straight into the world of future fantasy cinema.

Folman, director of the Oscar-nominated Waltz with Bashir, was inspired by The Futurological Congress, a 1971 novel by acclaimed science fiction writer Stanislaw Lem.

The film will first be released onto iTunes/On Demand on July 24, followed by a limited theatrical release on Aug. 29, and a New York release on Sept. 5.