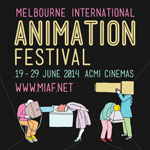 This week, the 2014 Melbourne International Animation Festival (June 19-29) will kick off in the Australian Centre for the Moving Image. Animation Magazine caught up with festival director Malcolm Turner for a look behind the scenes of the 14-year-old event.

Animag: What sets this edition of the festival apart from previous years?

Malcolm Turner: The curated programs are always different every year. This year we have a major focus on Parisian animation called “3 Days In Paris” (which is four different programs curated during a hectic three day period in which I visited almost thirty different studios, archives, distributors, etc.), a three program set of programs showcasing the best new South American work, a two program tribute to Canada’s Quickdraw Animation Society, and a special tribute to Norman McLaren.

One thing that is very different this year is the fact that we are showing two features films – it’s very rare for us to show features. One is Consuming Spirits by American filmmaker Chris Sullivan, and the other is The Stressful Adventures Of Boxhead And Roundhead which is a world premier and made by New York-based, but Melburnian ex-pat, Elliot Cowan.

How many films will play? Do you have any top-picks?

We are screening over 450 films and it’s dangerous turf for the festival director to start picking out favorites.

I always really want people to support the Australian programs though, and the good news is that it has been a pretty strong year for Australian animation. We received about 150 Australian entries and of those we are screening about 50. It’s great, it’s the thing that really differentiates MIAF from all the other animation festivals in the world.

How have some of the notable filmmakers from past MIAFs fared in their careers?

It’s a good question. People like John Lewis went on to work on Adam Elliot’s feature film Mary and Max, and he is finishing off his latest funded film right now. A number of people wind up forming co-operatives (like the Oh Yeah Wow crew) and there are some pretty successful ones out there such as The Lampshade Collective who made Nullabor a few years ago which screened EVERYWHERE, and who are just starting their festival run with their new film The Gallant Captain.

How would you describe the state of in Australia?

Fragile probably, it’s always been so. I think the industry ebbs and flows with general economic tides but the fluctuations in the art form side of the equation are more difficult to predict and describe.

A lot has to do with funding and that is tight and (in my view) tends to be rightly focused on providing at least half decent support to a smaller number of films, rather spreading the money too thinly.

There is a real DIY element to the Australian character though and a lot of great and quirky little gems are being made in basements.

Why did MIAF decide to highlight Norman McLaren?

It’s the 100th centenary of his birth. McLaren is easily, and by a long measure, the most important figure in the history of animation, particularly auteur / creative animation. It’s a pretty easy decision to make – pretty much compulsory.

In what ways do you think McLaren’s work remains influential today?

In the National Film Board of Canada, he built (from scratch) the single most important R&D machine in the world of auteur animation. What they do counts; always has, always will.

Yes, he developed a LOT of animation techniques and wrote the rule book for them all and, yes, he was in his own right a filmmaking genius, but in the NFB he built an organisation that didn’t just make great films but he crafted and locked in an entire artistic culture that showed by example how artists can work, how they interact, how they share their work with the world. That set the tone for how animation as an art form thought about itself, how it behaved, how it went about making and showing its work. He had profound influence on an entire culture.

Learn more about the Melbourne International Animation Festival at MIAF.net.