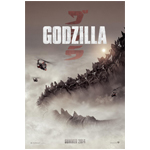 Director Gareth Edwards’ transition from the low-budget indie Monsters to the Godzilla reboot had more to do with scaling up than modifying his classical storytelling ability. Taking cues from Steven Spielberg (Jaws and Jurassic Park) as well as gritty docs, he wanted his version of Toho’s famous Kaiju to be believable, versatile and, dare we say, even heroic.

It was all part of staying true to the Toho original yet also being socially relevant for our times: “We police the world and tell everyone else not to have nuclear weapons and what if the tables were turned with a creature that feeds off radiation,” says Edwards, who called the movie a one-stop shop for monster mayhem, only with a humanizing twist.

Edwards, whose first exposure to Godzilla as a youngster in the United Kingdom was actually Hanna-Barbera’s Godzuki cartoon series, enjoyed opening up a Pandora’s Box while not overplaying his hand too early with spectacle.

“Animals are very bad storytellers, so we ended up dialing in a lot more human performance and he went incrementally from being totally animalistic to a lot more like a guy in a suit doing the performance, because you needed to understand in his body language whether he’s tired or angry.”

This meant that the first photo-real, CG monster had to be graphically arresting as well as powerful. Therefore, MPC, under the overall VFX supervision of Oscar-winning Guillaume Rocheron (Life of Pi), faced its most daunting animation challenge. The London house worked with Edwards for seven months bringing Godzilla to life, making it ready for shot production. New in-house tools were developed to create skin and muscles. An extremely high level of detail was used by MPC’s artists due to the close-up nature of the camera work on the 350-foot creature, particularly in texture. VFX Supervisor Nicolas Aithadi also worked with Edwards on design, previz and the first Comic-Con trailer where you see Godzilla emerge from the dust and rubble.

Designing Godzilla and then defining his performance was, of course, the centerpiece of the movie. The way Edwards plays the man vs. nature theme is like a thriller, teasing shots early on and building suspense before the full reveal and not overplaying the spectacle.

“We found that it was always efficient graphically to show the spikes on his spine,” Rocheron explains. “And when Godzilla looked toward the camera, we would pose him so he looked slightly down. You get that fairly aggressive feeling but, at the same time, we would position the back and the spikes so you would get that kind of Mohawk. If you look at him up close, you can see all of Godzilla’s expressions but further away you see him more as a silhouette that’s very graphic.”

By framing Godzilla primarily in silhouette (shot by cinematographer Seamus McGarvey), the experience is more intense. “We were using background environments and patches of light and fire to help shape the image as a strong composition,” Rocheron says.

Godzilla is a giant lizard. But lizards don’t emote, so they studied bears and other predatory creatures, relying on realistic body language, subtle facial detail and breathing to propel the performance. Godzilla expresses anger, sadness and triumph. “We spent a lot of time lighting Godzilla and (his combatants, the MUTOS) so they registered clearly,” Rocheron says. “It took six months to sculpt him and get the right proportions, and then making sure we had a muscle layer and on top of that a fat layer. We were simulating many different kinds of skin because if you look across Godzilla’s body, it’s covered with around 10 different types of skin thicknesses.”

MPC used Maya as the base software along with ZBrush for modeling, Mari for texturing and Kali (its proprietary destruction simulation tool) through the Katana lighting interface. In fact, Kali was upgraded and given a number of significant incremental improvements to make photo-real destruction.

In addition, all of the muscle and skin sliding tools were plug-ins done in-house to customize the work, “and making sure we could pipeline and streamline that. These are heavy assets to simulate and to render. It takes between eight and 12 hours just to compute all the dynamics of the muscles and the fat and the skin.”

As for the MUTOS, they were original monster designs. In sharp contrast to Godzilla, they are simple, slick and black. “They are almost like insects, which is what Gareth wanted to stay away from. We actually used bats as reference for the wings. They are made of sharp lines and angles, and skin that is whale-like. But as soon as they started integrating shots into the movie they started to lose some of the strong graphic quality through the blackness. So we had to do quite a bit of shot development to adjust features and length so they registered better.”

Bill Desowitz runs Immersed in Movies (www.billdesowitz.com) and is the author of James Bond Unmasked (www.jamesbondunmasked.com), now available on Kindle with a new Skyfall chapter.