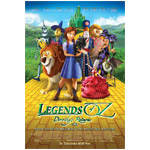 ‘Legends of Oz’ a Passion Project for Cast, Crew

Perhaps no cinematic other world is as well-known and beloved as that of Oz, which sprang from the mind of author L. Frank Baum more than a century ago before becoming the basis of the all-time classic 1939 movie The Wizard of Oz.

People’s love for that classic movie is strong, but Oz has always been a land big enough for more stories and that’s exactly what motivated the makes of the new independent stereo 3D animated feature, Legends of Oz: Dorothy’s Return, in theaters May 9.

Adapted from the book Dorothy of Oz, written by Baum’s great-grandson Roger Stanton Baum and first published in 1994, Legends of Oz is a passion project for the cast and crew. The movie picks up shortly after the end of the classic movie, and Dorothy is called back to Oz — where time has passed much more quickly and her friends Scarecrow, Tin Man and the no-longer-cowardly Lion need her help to stop the spreading rule of the evil Jester.

The animation talent also is comprised of talented animation veterans, such as producer Bonne Radford and directors Daniel St. Pierre and Will Finn.

The project began, however, with producer brothers Ryan and Roland Carroll, who had known Oz since their Chicago childhoods including frequent walks through Oz Park on the way to and from school.

“As a kid, my mom actually bought me all the (original L. Frank Baum) books and I actually read them — I loved them as a kid,” says Ryan Carroll. “But I also loved animation and I wanted to be an animator as a kid. It always struck me as wouldn’t it be wonderful to do these stories in animation.”

Finding out the rights to Roger Stanton Baum’s continuation were available, Carroll says he decided to approach the author in a respectably old-fashioned way: He wrote him a letter.

“I went ahead and wrote a personal letter to him telling him how much I love the Oz stories myself but also that I have six daughters and how important Dorothy was in our household,” he says. “We struck up a friendship and went back and forth on a few letters and he was kind enough to option the projects to us and we developed it from there.”

Enter Radford, who also had a lifetime love for the original Wizard of Oz movie and years of animation experience at Universal and Amblin. “One of the things that was really important to begin with was to be really respectful of the first material — not just the books, but also everyone’s feelings about heir own connections to Oz,” says Radford.

One of the first major decisions was to make the new feature a musical. “We felt it had to be a musical because the first one was and — I know you can’t follow in the footsteps of Harold Arlen easily — so we had to find our own path,” says Radford.

With the songs going into production as early as possible in the development and writing process, Radford was able to recruit some big musical names to write tunes for the feature, including Canadian rocker Bryan Adams and his writing partner Jim Vallance, Tift Merritt, Jim Dooley and Mike Himelstein.

The songs affected the casting, too. Radford says they wanted to ensure the actors playing the parts could sing their characters’ songs. Michele, a Broadway veteran since childhood, was a top choice even though her breakthrough role on the hit TV series Glee had barely aired when she was cast.

For casting the classic trio, Carroll says they like the idea of bringing a sense of Chicago to the roles by casting actors who came up through the city’s stand-up scene and Second City. The appeal of Oz and the connection almost everyone has with the story was a big draw in attracting the rest of the cast and the animation talent for the film.

Composing the score is Toby Chu, who is doing his first animated feature on his own after working with Harry Gregson-Williams on more than 50 movies. He says composing for animation is a distinctly different challenge than writing a score for live-action in that animated movies tend to be paced much more quickly and require the music to be more active and responsive to what’s on screen.

“Compositionally, you have to be flexible and be able to sort of sculpt and to support the narrative and the storytelling,” Chu says. “You have to do that too with live action, but with live action you can get away with being more atmospheric and moody.”

Radford says technology allowed this film to have people from all over the world working on it. “We had visual development from England and Canada and Europe and we had storyboards that came from all different places,” she says. “We took the animation to Mumbai, and spent a lot of time there with our department heads, who were from here working with the Indian crew and it was really positive.”

The model also is cost-effective, allowing features like Legends of Oz to get made without blockbuster budgets. “The model that we have, which is a more modest, middle-range budget, is what the studios are gravitating towards also, because animation is cost-prohibitive unless you have a blockbuster and not all of them are going to be blockbusters,” says Radford. “So to come up with a model that actually makes sense for everybody, I think we’re sort of ahead of the curve.”

Global collaboration aside, the process of making the film was nothing out of the ordinary, with pre-production work done at Duncan Studio in Pasadena, Radford says. “It was a great environment. A lot of people who came out of Disney and DreamWorks and several that were freelancing were joining us for our story pitches,” says Radford. “People can jump on what they like because they’re not tied to one company anymore; that’s not what the business is any longer.”

Carroll is confident the film will be a success, even coming out in the busy early summer blockbuster season. He says he feels good that Legends of Oz: Dorothy’s Return will beat the $19 million opening weekend take of The Nut Job, one of the most successful independent animated features in recent years. “But most important to us is that we build an ongoing franchise,” he says. “We’ve acquired ten books, ten different stories and we’re looking at going potentially in to a TV series as well as a stage play and so we are really trying to build this for the long term.”

For more on the Legends of Oz: Dorothy’s Return, be sure to pick up the next issue of Animation Magazine, on sale May 30, or subscribe and be sure never to miss out!