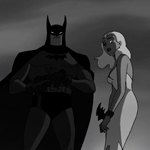 Bruce Timm returns to Batman next week in a short film titled Batman: Strange Days that will debut as part of Cartoon Network’s DC Nation block.

Here’s some images from the short, which is done in a stark style features Batman taking on Hugo Strange and a giant of some kind — and is that Silver St. Cloud? (Longtime comics fans will remember the classic run by Steve Englehart and Marshall Rogers on Detective Comics in the 1970s that also influenced Tim Burton’s 1989 Batman feature.)

The short will air as part of CN’s DC Nation after a new episode of Teen Titans Go!, which airs at 6:30 ET/PT.