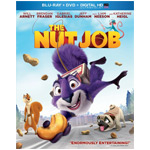 Featuring Will Arnett as a curmudgeonly squirrel named Surly who is banished from the park eyes a nut shop as his salvation, the feature was a solid hit when it was released in January, earning $69 million in worldwide ticket sales. Directed by Peter Lepeniotis, the film features the voices of Brendan Fraser, Liam Neeson, Katherine Heigl, Maya Rudolph, Jeff Dunham and Gabriel Iglesias.

If that’s not enough to scratch your itch for animated superhero antics, head over to Warner Archive for The Green Lantern: The Animated Series (Warner Bros. Archive, $29.99 Blu-ray).