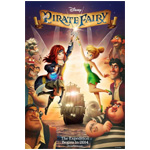 Connecting to a Classic

Writer-director Peggy Holmes knew she wanted the sixth entry in Disneytoon Studios’ Tinker Bell feature series to be about a girl who runs away from home. But they were missing a way to turn that into an exciting and engaging story.

“We were actually sitting with (Walt Disney Animation Studios Chief Creative Officer) John Lasseter and the other directors and writers and talking about where can we go,” she says. “And after about two hours, John all of the sudden pounds his fist on the table and we all look up and he goes: ‘Pirates! She could run into pirates!’ And we all went, oh, gosh, what a big idea! And with pirates came the idea that we could introduce a young Captain Hook.”

The path was then set for The Pirate Fairy, due out on home media April 1, and the first movie in the series to steer clearly into the realm of Disney’s 1953 classic Peter Pan.

The film centers on a new fairy character named Zarina, voiced by Mad Men star Christina Hendricks, a slightly nonconformist pixie dust keeper who has unconventional ideas for using the magical substance. When one of her experiments backfires, she runs away from Pixie Hollow only to return a year later leading a band of pirates that steals the source of pixie dust. That forces Tinker Bell and her friends to try to stop her, a goal made more difficult by a mishap that switches their powers, and unites all the fairies against an unexpected but familiar foe.

Designing Zarina was one of the main challenges, says Raymond Shenusay, head of story on the movie. “She had to be a very human character up front enough for us to be invested in her, but she also had to become a pirate and do some mean things to her friend,” he says. “We needed a character who, despite the fact that she’s six inches tall, you could believe that these pirates were taking orders from her.”

The look of the character had to stand out as well. Character designer Ritsuko Notani says her first look in Pixie Hollow followed the general fairy esthetic — wearing all organic materials like leaves for clothes — but with tweaks to show her eccentricities such as slightly unkempt hair and being just a little taller than the other fairies.

For her transformation into the Pirate Fairy, she gets a new costume including a pirate coat made from the cuff of a men’s jacket, wild red hair and smoky eye makeup.

The young Captain James Hook was a particularly difficult character to handle because the reveal of who he is to become is a key plot point in the movie. That meant there had to be subtle hints to his identity without being obvious. Most of the movie sees him without his iconic hat, coat or mustache, but sharp eyes will catch details like the tiny ruffle on his shirt collar that foreshadows the full costume he comes to wear.

Inspiration was drawn from frequent trips to the Disney Animation Research Library to inspect the original artwork from Peter Pan.

Avengers star Tom Hiddleston voices the character, bringing a similar balance to his performance. “The original performance of Hook was by Paul Conrad and it’s a big, over the top performance,” says Holmes. “What Tom clearly understood was it was a believable performance for that era and so he understood he had to find a huge performance here but believable for a contemporary audience. And he got that in spades.”

The animators on the film looked frequently at reference material, some of it of the actors as they were recording their lines, says Yuriko Senoo, animation supervisor on the movie. “For Christina Hendricks, who did the voice of Zarina, we also looked at Keira Knightley from Pirates of the Caribbean,” says Senoo. “But we mainly shot reference of ourselves to get the performance that we wanted.”

The most difficult character to animate proved to be the baby crocodile. (Yes, this movie reveals how Hook’s nemesis from Peter Pan got the ticking clock in his stomach.) Senoo says it was a technical challenge to animate a character that is so cartoony — occasionally walking on two legs and at other times on four.

Of the human characters, Senoo says the animators most enjoyed working on the pirates. “We could go broad and do dance and song,” she says.

Environments also offered lots of opportunity for the feature, such as revisiting and getting a closer look at iconic locations from Peter Pan, says producer Jenni Magee-Cook. “We didn’t have the interior of Skull Rock to go from, so we had to add to that,” she says. “It’s really subtle but if you look at the buildings inside there when the ship is docked on the inside, there’s building and a water wheel and a dock and if you really study it those are all ship parts.”

The production also sent a crew to visit pirate-like ships and take photographs from the perspective of the 6-inch tall fairies using a 3-D camera.

Obviously, the makers of The Pirate Fairy were serious about honoring the past and paying attention to all the details opened up by its connection to Peter Pan. And, if you needed more proof, the ticking of the clock the baby croc swallows is the original sound from Peter Pan, pulled from the archives.