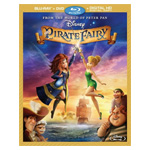 ‘Pirate Fairy,’ ‘War of the Worlds’ Debut on Disc

Return to Pixie Hollow for a new adventure with Tinker Bell and her friends as they take on The Pirate Fairy (Disney, $36.99 Blu-ray, DVD and digital copy; $29.99 DVD). The original animated feature is the first in the fairy series to tie in directly to Peter Pan, and features Mad Men star Christina Hendricks as Zarina and Thor: The Dark World’s Tom Hiddleston as a young Captain Hook. Read more about The Pirate Fairy in the new issue of Animation Magazine, available now in print or digital formats. [www.animationmagazine.net/subscribe/]

Also new is War of the Worlds: Goliath (Anderson Digital, $20.99 3-D Blu-ray and Blu-ray, $14.99 DVD), an original independent animated feature directed by Joe Pearson. The feature picks up the story from H.G. Wells’ science-fiction classic and postulates a different history of the world into the 20th century. Check out our exclusive online interview with Pearson here. [www.animationmagazine.net/features/exclusive-perseverance-earns-war-of-the-worlds-goliath-limited-theatrical-release/]