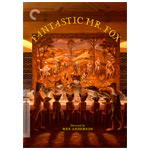 One of the most-acclaimed indie animated films of recent years gets the Criterion treatment this week with the release of Fantastic Mr. Fox: Criterion Collection Edition (Fox, $39.95 DVD and Blu-ray combo pack).

The three-disc set will surely thrill fans of the stop-motion classics, as it features a new digital master of the film approved by director Wes Anderson as well as audio commentary, storyboard animatics for the entire film, behind the scenes footage, an audio recording of author Roald Dahl reading the book on which the film is based, an hour-long documentary on Dahl, and much more. (Oh, and for those Criterion collectors out there, this is spine No. 700. Irresistible, right?)

One of TV’s top visual effects extravaganzas returns as Game of Thrones: The Complete Third Season (HBO, $59.99 DVD, $79.98 Blu-ray) arrives. The third season of the hit series, based on the novel series by George R.R. Martin, features some of the most-discussed moments on television from the past few years and will get viewers up to speed in advance of the April 6 premiere of season four.

Fill your hunger for superhero thrills with Beware The Batman: Shadows of Gotham (Warner Bros., $19.97), a two-disc set featuring the first part of the first season of the most-recent series based on the popular DC Comics hero.