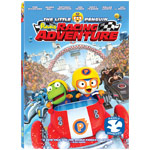 Exclusive Clip From ‘The Little Penguin’

Here’s an exclusive clip of Bell talking about his role in the feature:

It also features a soundtrack with music by multiplatinum recording artists Smash Mouth along with Drake Bell, Parker Theory and The Selectrics.

The DVD bonus materials include a behind-the-scenes voice recording featurette and a sneak peek of award-winning shorts from Miniscule and has a suggested retail price of $19.98.