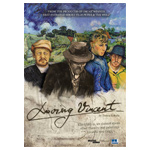 Poland-based Breakthru Films has turned to Kickstarter to fund its most-recent project, an animated film that details the life of painter Vincent Van Gogh through the eyes of his subjects using a new technology that allows each frame of the film to be painted in oil on canvas.

The project, called Loving Vincent, is headed up by animator Hugh Welchman, who won a Best Animated Short Film Oscar in 2008 for Peter and the Wolf.

The Kickstarter campaign is looking to raise 75,000 euros (about $102,000) by Feb. 6. The money raised will be used in part to hire and train artists to create the oil-painted frames using the studio’s proprietary Painted Animation Work Stations technology, or PAWS. The technology will allow the company to created around 56,000 keyframes in just over a year — enough to complete the film.

Rewards for donors range from computer wallpaper all the way up to tutorials with Welchman and his team and a 20 second clip of yourself animated in the style of the film.

The Kickstarter campaign can found at www.kickstarter.com/projects/438026311/loving-vincent-bringing-van-goghs-paintings-to-lif.

To get a look at a test reel for the project, check out this trailer: