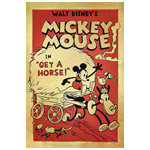 How director Lauren MacMullan and her team crafted the wonderful new Mickey Mouse short, showcasing a remarkable marriage of 2D and CG elements.

For a star who’s been in show business since 1928, Mickey Mouse is sure getting lots of attention these days. After making a splash with the beautifully designed 2D short-form series on Disney Channel in June, the resourceful little guy is back on the big screen again. Mickey, along with his gal pal Minnie, their friends Horace Horsecollar and Clarabelle Cow and classic bad guy Peg-Leg Pete are stars of the new seven-minute short Get a Horse!, which accompanies Disney’s feature Frozen this November.

This utterly charming and inventive enterprise is directed by Lauren MacMullan, a veteran of TV series such as The Critic, The Simpsons and Avatar: The Last Airbender, who came up with the idea for the short about three years ago. When she was working on Wreck-It Ralph, she found out from the movie’s director and fellow Simpsons alum Rich Moore that Disney was looking to bring back Mickey Mouse. So, she came up with a simple pitch that mixed the character’s vintage roots with today’s CG and 3-D technologies.

“For some people, Mickey’s kind of an icon on a t-shirt, but I started to think about an era of animation that I loved–the rubber-hose classic Steamboat Willie period, which has so much juicy life to it. Mickey is only constrained by what he thinks about…he can stretch out his leg, defy gravity, wrap it around his head—there’s so much Depression-era inventiveness in those early years.”
— Director Lauren MacMullan

“There have been so many different versions of Mickey and he means different things to different people,” says MacMullan with an abundance of energy and enthusiasm. “For some people, he’s kind of an icon on a t-shirt, but I started to think about an era of animation that I loved–the rubber-hose classic Steamboat Willie period, which has so much juicy life to it. Mickey is only constrained by what he thinks about … he can stretch out his leg, defy gravity, wrap it around his head—there’s so much Depression-era inventiveness in those early years.”

MacMullan’s idea was to use Mickey’s legacy and work with some of the best animators in the business—including Eric Goldberg, who came on board as 2D supervisors and Adam Green as CG supervisors, and veterans Dale Baer and Mark Henn—to give modern audiences a perfect blend of old-timey mouse and 21st century star. “The idea was to start the short with the classic 2D Mickey and his friends, then pull it all out in color, CG and stereoscopic 3-D, and lose all those middle decades when he has a mortgage in Burbank and is lecturing Pluto about being naughty!”

The top brass at Disney, including John Lasseter and Ed Catmull, really liked her vision, which pulled Mickey out of the black-and-white world on the screen and into the real 3-D universe, a la Woody Allen’s Purple Rose of Cairo. “The idea would work only if this was going to be a theatrical short,” recalls MacMullan. “I had only been at Disney for a little while, and John Lasseter didn’t know me very well, but all it took was that one meeting with him and Ed Catmull who said, ‘Let’s make that short’ as he left the room.”

Working with a tight crew of about 12 animators at the same time as Frozen was in production, the Get a Horse! team looked at some of the old Mickey shorts to get all the period details and the approach to humor right. “They had a great way of coming up with animation-based jokes that are based in real life,” says the director. “For example, Mickey is chasing Pete and riding Horace and he can’t quite reach Minnie, so he shoves the horse forward and that extends his head, or the way Clarabelle is playing her own udder. John Lasseter would look at it every so often, and we’d get notes to make it a little faster and as funny as we could. When in doubt, beat Pete up! You just have to make sure your pauses are right and you’re looking at the right place on the screen to make a joke work. We came up with five times as many jokes as we could include in it … and yes, some of them were unprintable,” she says with a laugh.

A Blast from the Past

Then, there was the matter of finding the right actor to voice the studio’s top mouse. MacMullan says the decision to use actual audio recordings of Walt Disney himself came about organically. It just felt right to grab lines from the old shorts because they spoke to the era so accurately. Since Mickey doesn’t talk that often, the assistant editor had to spend months digging through the archives looking for the right snippets of dialog to match the short’s sequences. In one case, when Mickey enters the modern world and says the word “Red!” they had to build the word from syllables taken from different words, which took them about two and a half weeks to make it just right.

To duplicate the feel of the classic toons from the ’20s, digital tools were used to add faux damage to the short. “We needed to look at exactly how the film would have looked like if it was produced in that era,” says MacMullan. “We had to add the contrasts as the blacks were bloomed out on the high-contrast films. Then we found out that during that time, the electric system was not steady from one second to the next, so that’s why the light would fluctuate on the cels. We also included fake cel shadows, paint mistakes and cut-out overlays, which were very difficult to do, to go back and take a mistake path.”

One of the most challenging scenes of the film involves Mickey flipping the screen at lightning speed to keep Pete at bay. This required a delicate combination of hand-drawn and CG techniques, which involved mapping the 2D image onto a moving CG element and pushing it through. In this case, an old Popeye cartoon which featured the sailor set in the old Nickelodeon machines, proved to be especially inspiring.

When MacMullan and Goldberg presented the short at the Annecy festival in June, the audience, who were led to believe that they were about to see a recently discovered treasure from the archives, was blown away by what they saw.

“It’s been amazing to see people react to the short with such joy, especially when Mickey jumps out of the screen.” says MacMullan, who grew up loving Warner Bros. cartoons on TV and Disney pics like The Jungle Book and Robin Hood on the big screen. “I started out in animation when it wasn’t a viable career choice. For my senior project at Harvard, I did an animated short similar to the old shorts, featuring some kind of a girl bug and a horse, and one of my professors told me, ‘Lauren, this is very lovely—but why?’ I guess the lesson is that your career path may not be what you think it would be. I certainly took a very circuitous route to Disney. But if you work on things that you love so much that they tug at your heart, then it all ends up well.”

Mickey Mouse Get a Horse! will play with Disney’s Frozen in theaters, beginning November 20.