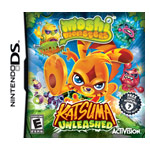 Mind Candy and Activision have released the newest Moshi Monsters console video game in the U.K. featuring the character Katsuma. The new game, which is called Moshi Monsters: Katsuma Unleashed arrives just a few months before Katsuma makes his big-screen debut in Moshi Monsters: The Movie on Dec. 20 in the U.K. The 3D side-scroller will also be available in the U.S. on Nov. 5.

“It’s a big year for our most popular Moshi Monster, who will be one of the stars of our new Moshi movie in December. With Moshi Monsters: Katsuma Unleashed we’ve broken out Katsuma as a stand-alone character to deliver an all-new, incredible Moshi Monsters game that our millions of fans of all ages can enjoy,” said Mind Candy’s head of marketing Andrew Matjaszek.