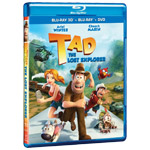 If you haven’t managed to catch Enrique Gato’s hit adventure-comedy Tad: The Lost Explorer at one of its festival and theatrical engagements around the world, now’s your chance to bring it home as Gaiam Vivendi Entertainment and StudioCanal release an English language version on Blu-ray 3D combo pack ($19.97) and DVD ($19.95) today. The award-winning animated adventure is available on disc exclusively at Walmart and Sam’s Club, and digitally everywhere.

Tad: The Lost Explorer—winner of three Goya Awards including Best Animation Film—centers on construction worker Tad Stones, who often daydreams about living a more exciting life. His dreams come true when he is mistaken for a famous archeologist and whisked off to Peru while in possession of a sacred key. Soon Tad is caught in a thrilling race against evil treasure hunters as he joins a professor and his beautiful daughter in their search for the lost city of Paititi.