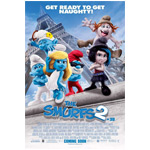 Second Time’s Not a Charm for ‘The Smurfs’

Sony’s big summer sequel Smurfs 2 failed to draw big numbers at the American box office this past weekend. The live-action/CG-animated hybrid landed in the third spot Stateside, making about $27.8 million during its first five days at the box office.

The studio was projecting a $35 million opening weekend, since the original movie brought in about $35.6 million during its first three-day weekend in 2011.

Peyo’s little blue guys and gal fared better overseas where they made a total of $80.3 million (still less than the studio’s projected $100 million). The numbers were better in Russia and Latin America then they were in Europe, says Deadline.com. The original movie made 75% of overall cume abroad ($420 million foreign vs $142M domestic). Although the critics didn’t warm up to the sequel (it rated a Rotten Tomatoes of 12%), the Raja Gosnell-directed family film scored an A- CinemaScore from audiences.