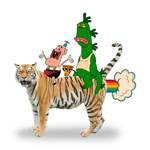 The manic minds behind the channel’s new 2D toon Uncle Grandpa give us a glimpse into their super-positive world.

Most of us have memories of a special relative that made an impact on our childhoods by being so connected to his or her own inner child: The grandparent eager to kit out a pillow fort with all the trappings, the uncle who lets you drive his beat-up Chevy down the block. For these folks–and those who have tragically sober, boring families–Cartoon Network is delivering the ultimate expression of that can-do, magical mentorship with its new series Uncle Grandpa.

Created by Peter Browngardt (Secret Mountain Fort Awesome), the show centers on everyone in the whole world’s uncle and grandpa: Uncle Grandpa! Travelling around in his suped-up RV, the eternal optimist is willing to help out whenever, wherever and however he can, coming up with unusual solutions for any problem. Uncle Grandpa (voiced by Browngardt) is aided in his cheery quest by his pals Belly Bag, a talking fanny pack (Eric Bauza); Mr. Gus, a dinosaur man Uncle Grandpa rescued as an egg (Kevin Michael Richardson); Pizza Steve, an egotistical slice of pizza who wears sunglasses (Adam Devine); and a realistic-looking tiger who flies with rainbow propulsion, named Giant Realistic Flying Tiger.

“I grew up with a very large family, and had a lot of friends of the family that we called ‘uncle’ … they all had pretty big personalities and would always do crazy stuff with me and my brothers and sisters,” says Browngardt, who got his career started at age 19 on Futurama (he also worked on other Cartoon Network series Chowder, The Marvelous Misadventures of Flapjack and Adventure Time). “When I was trying to think of a show to pitch, I thought, what if I made a character that was the ultimate version of that? … Someone like that who solves problems or just takes people on crazy adventures. I love Dr. Seuss’s Cat in the Hat, Mary Poppins and those sorts of magical people who influence a situation.”

Serving as Browngardt’s co-pilot on this animated road trip is creative director Audie Harrison, who was a storyboard artist on Secret Mountain Fort Awesome. But the duo have been friends and collaborators since long before their first TV project together: Browngardt and Harrison met on their first day at CalArts and went on to team up for short films and other side projects, even when they were a continent apart. Harrison previously worked in CG at Pixar and Nickelodeon and as a vfx artist for films like The Golden Compass. What’s more, their freshman year studiomate, Casey Alexander (SpongeBob SquarePants), is now the show’s supervising director–the reunion is “a dream come true” for the show’s creator.

Like many of the network’s most successful series, Uncle Grandpa is a hand-drawn, 2D effort, with the team of between 20 to 30 artists putting stylus to screen at Cintiq workstations. (“I think there’s one person on the crew who still uses pen on paper, which we scan,” notes Browngardt.) All pre-production–writing, storyboarding, design, color, etc.–is done at Cartoon Network Studios in Burbank, where they also handle post production after the animation comes back from service studio Rough Draft in Korea.

It takes about nine to 10 months to get an episode from script to completion, although Harrison points out this estimate is complicated by the series’ variety-show style format. Each episode, in addition to the main seven- to nine-minute story, features an original two- or three-minute short, plus a series of gag “bumpers” stringing it all together.

“We had the benefit of the pilot being seven minutes, and that was proof that the character functions very well in that time limit,” notes Harrison. “We had a lot going for us to show the network that this would really work.”

The shorts are developed independently of the longer stories and are later mixed and matched with them. Currently, the shorts are created by show staffers, but Browngardt hopes to invite in guest directors in the future.

Uncle Grandpa‘s design further cements the characters’ antics in their own, pure cartoon world. Browngardt says his artistic style comes from influences he “can’t shake”–a blend of respect for the old school, ultra cartoony creations of Max Fleischer and Tex Avery as well as the influences of his ’90s childhood like Ren & Stimpy, MAD Magazine and the non sequitur humor of Gary Larson.

“It’s just me being a lover of animation and cartoons,” the creator remarks, “I just kind of want to put a little of everything in there … The color palette is very saturated–that comes from a very classic cartoon feel and definitely a lot of ’60s underground comics.”

Uncles and Tigers and Grandpas, Oh My!

For the dynamic cartooning duo, one of the greatest challenges of creating the show was figuring out how to piece the eccentric characters and their stories together.

“Starting out, not knowing who these characters are and how the show’s going to work, that was super scary,” Harrison admits, citing Mr. Gus as a particular quibble prior to casting. “But, once we got the characters nailed, they were so fun to write for!”

“Also, the look of the show–designing all the characters, designing all the environments,” Browngardt adds (and with Uncle Grandpa’s ever travelling RV, there are a lot of those). “In the front end of production there is a lot of artwork that has to be created. There’s always a lot being made during production, but pre-production is extra crazy because we’ll be like, oh, we want something to happen in Mr. Gus’ room, but we don’t have the room designed! Once you get over that hump it smooths out, and it’s a big relief.”

Despite the mad scrabble to pull the world of Uncle Grandpa and its rather diverse denizens together, Browngardt says it has been incredibly rewarding to work with his team and see other talented artists become so amped up about the show:

“Giving them an idea and letting them run with it, and when we get the whole crew together and they pitch their board and everyone laughs and enjoys it–not only are you seeing a good episode, you’re seeing an artist invest themselves in their work.”

Now that they are in the rhythm of working with these strange cartoon beings, Harrison and Browngardt say favorites are definitely emerging. Both love tackling the self-obsessed Pizza Steve.

“He’s kind of a jerk, and I love writing for jerky people,” says Harrison, with Browngardt agreeing that it is a blast writing for a character who is completely unaware of his own failings. The creator adds: “My favorite is definitely Uncle Grandpa, I guess because [since I voice him] I am him in a sense. So it’s easy to throw myself into his situations while writing and come up with ideas.”

One of the most oddball characters (during our interview, the show heads could not even talk about her without breaking into laughter) is Giant Realistic Flying Tiger–the sole photo cut-out creature in the show’s 2D cartoon world.

“Giant Realistic Flying Tiger is the only girl in the RV with Uncle Grandpa, and she only talks in roars and meows,” Browngardt explains. “She’s kind of a teenage girl, she’s got boy band posters in her room and she definitely makes her presence known. It’s kind of fun to go and try to make this really slick-looking cartoon, very colorful and hand drawn, and then just throw a photo of a tiger in there.”

Browngardt and Harrison explain that GRFT is animated in a South Park-esque, flapping-head style–think jerky, early Flash videos made by crudely animating photos of celebrity heads. Highlighting her photoreal flatness, GRFT is animated using different tiger pics slapped together in Photoshop. “And the worse the Photoshop is, the funnier it is,” notes Harrison.

“It’s kind of amazing, you draw, draw, draw and do all this artwork, and then you put in a photo of a tiger and people laugh,” adds Browngardt. “She’s kind of a crew favorite … It’s fun to write for a character that’s not verbal. She just roars, but you get a lot out of it. Like Chewbacca.”

With their magical mystery tour moments from its airdate, the creative pals are hoping that audiences will respond to the carefree comedy and enjoy it for its Devil-may-care wackiness without wondering why the proverbial coyote won’t give up on catching that darn roadrunner.

“[I want viewers to] just have a sense of fun, and not take anything too seriously, and just go along. Tune in to Uncle Grandpa and you go on a little roller coaster ride,” says Browngardt. “Not to sound like Pizza Steve! You can’t predict what other people think is funny. You have to do what makes you laugh and just go with that. Someone will get it.”

Harrison sums it up nicely when asked about his aims for the series: