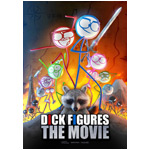 The creative cartooning duo of Ed Skudder and Zack Keller aren’t just dickin’ around: the enormously popular anti-heroes of their Dick Figures YouTube series will get their first feature-length outing following their record-setting Kickstarter fundraising campaign last summer. Distribution of Dick Figures: The Movie is set to begin on September 17 of this year.

Produced by Six Point Harness and distributed by Mondo Media, the 73-minute Dick Figures movie will receive a unique digital distribution plan through partners YouTube/Google, Cinedigm and Yekra this fall. The webseries has received over 350 million views since its launch in November of 2010, and the film’s Kickstarter campaign received a whopping $300,000, making it the largest animated fund-raising effort on the crowd-funding site.