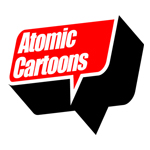 Canadian studio Atomic Cartoons and Australia’s Sticky Pictures are hoisting the mizzenmast and starting production on 26 half-hour episodes (52 x 11) of Atomic’s original digital 2D-animated comedy series Pirate Express. The series is aimed at kids 7-11 and is set to premiere on Canada’s TELETOON in the fall of 2014 and on Australia’s Nine Network in 2015.

The show follows the seafaring adventures of Newt, a 12-year-old boy from Atlantis, and the most dim witted crew on the seven seas on the ship Pirate Express. Newt’s father, Poseidon, has made Newt the captain of this zany vessel. His mission: to keep the former Captain LaPoutine and his crazy crew from making mischief and out of trouble. You can check out the rockin’ trailer here.

“We love pirates at TELETOON and we know our viewers do too. Pirate Express is a swash-buckling new addition to our lineup,” said Alan Gregg, Director, Original Content TELETOON Canada Inc., “We look forward to hoisting the mainsail and swabbing the poop deck with our great partners at Atomic Cartoons and Sticky Pictures.”