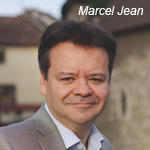 This is Canadian producer, director and author Marcel Jean‘s first year as the artistic director of the Annecy International Animation Film Festival. We recently chatted with him about the 2013 festival, taking over from longtime fest director Serge Bromberg and his vision for the world-renowned event.

Animag: This is your first year as the artistic director of the Annecy Festival. What are some of your favorite parts of the job so far?

Marcel Jean: Selection and programming are my favorites: I like to watch films, I like to pick the best ones and I like to build the programs. I’m happy when I have 50 short films to watch in a single day. It’s exciting to watch hundreds of recent films in a period of three months and at some point have a picture of the state of animation.

What was the most difficult aspect of stepping into this new position?

I receive so many proposals from people from all around the world and I have to say no to most of them, even if they’re valuable films or programs. As a programmer, I would like to have more screening rooms, more money to invite musicians, more places to present exhibitions, etc.

What is your take on the global animation scene in 2013?

In terms of short films, the first thing I noted was the strength of the animation from France. The economical situation in Europe is not very good and the production of animation shorts in different countries suffers from this, especially in the U.K., in Portugal and in Italy. The quality and the variety of animation schools in France and the strong financial support from the government tend to preserve the production there.

I was happy to see the vitality of independent U.S. animation and the quality of the Canadian projects. Another important factor is the emergence of independent production in China: We’ve selected three Chinese shorts in competition this year. It’s a premiere in Annecy.

Regarding the feature films, the biggest surprise was the geographical origins of the films: South Africa, Brazil, India. It’s good to see that films from these countries can compete with the best films from countries that are historically important producers.

What are some of your favorite animated movies/or animated characters of all time?

I love the works of Max and Dave Fleischer: Koko is a fantastic character and some of his films are among the most original in the history of animation. The Clown’s Little Brother and Koko’s Earth Control are among my favorites. I also have a crush on Betty Boop… But who doesn’t?

What kind of advice would you give animators who dream of having their shorts or projects accepted and rewarded at Annecy?

I beg you, don’t try to make a film to please me! You must find your own style, you must stay honest to yourself, work hard and do the best you can. Be an animator, not a painter or an illustrator.

Don’t be afraid to take some risks. When you receive more than a thousand submissions, you keep the films that stand out. So if you want to experiment, go for it without fear. If you want to tell a story, don’t be shy on emotion. If you want to be funny, make sure you are really funny.

For more info about this year’s event, visit www.annecy.org.