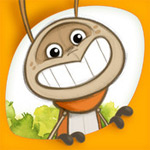 Finland’s Anima Boutique/Gigglebug Entertainment is reporting great success with its new iPad app, Gigglebug. The app, which invites kids to make grumpy animals by tickling them with a touch interaction, has proven to be quite contagious, landing on top of the free-to-play kids apps in Finland and China in its first two weeks of release.

“This is something that no game has yet done and when placed in young kids’ hands, it’s becomes a no brainer,” says Joonas Utti, the designer behind the Gigglebug app. “Our wives were not too convinced by existing apps targeted at young children, but it was clear that our kids still loved to play games on their iPad. So we decided to create an experience around iPad’s magical Retina display and combine it with the kind of laughter that spreads around a room. The goal was to create something positive, heartfelt and social for our kids to play with on iPad.”

The game introduces characters from within a 2D animated story universe.

“We aim to raise the bar in the children’s app space with an ambitious combination of storytelling, lovable characters, positive values and intuitive game play,” says Anttu Harlin, CEO of Gigglebug Entertainment.

A TV series based on the app will also begin airing in Finland on June 15th. The 10 x 5-minute format centers on the lead Gigglebug character who tries to cheer up his grumpy friends. Harlin and his team are raising awareness of the brand at the Annecy market this week and will continue to seek financing for a bigger project at Cartoon Forum and MIPCOM later this year.

“We are in advanced negotiations with broadcasters from Germany, Denmark and Finland with additional interest from broadcasters in UK, Spain, Argentina, Croatia, Sweden and Norway,” notes Harlin. “We will shortly partner with a top international sales agent to handle distribution the show.”