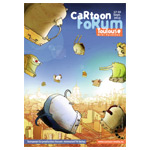 69 Projects to Make a Splash at Cartoon Forum

The European TV animation event Cartoon Forum has released its list of accepted series projects which will be pitched to the industry at the 2013 edition. This year, 69 projects will be represented in various stages of production. Overall, 800 participants form 32 countries (including 250 buyers) are expected to attend the event, which takes place September 17 to 20th in the French city of Toulouse.

Among the many new and interesting European shows represented at the event this year are:

According to the organizers, France continues to be the driving force behind European animation, presenting 21 of the projects selected for this year’s edition, followed by the United Kingdom with 10 pitches. Belgium, Ireland and Finland show a significant growth compared to previous years with respectively eight, seven and five shows. Germany will present five series, Spain three and Poland two. The Netherlands, Denmark and Sweden will be present with one project each, while Luxembourg, Portugal and Switzerland are present as co-producers.

European animation producers are continuing to focus on cross-media, enabling 43% of the pitches at Toulouse to be viewed on mobile phones, video-games, tablets or the internet, in addition to television screens.The projects presented imply a total investment of 217 million euros and some 400 hours of shows.
In line with the growing number of children’s television channels across Europe, 45% of the projects are aimed at children 6-12 years. Preschool fare represents one third of the projects and 10% of the shows are aimed at young adults and adults.

The residents of Toulouse and the Midi-Pyrénées region will also be able to take in some animated fun with the “On Cartoon” festival, a side event which will offer some recent European films, introduced by the director or producer, as well as a selection of short films by local talents.