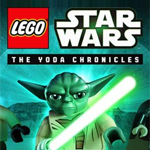 Cartoon Network will be welcoming the latest edition to the LEGO Star Wars toon family tonight (Wednesday, May 29) at 8 p.m. with the premiere of The Yoda Chronicles—a three-part animated adventure set in the prequel era that centers on a new Sith plan to create Force-enhanced clones and Yoda’s attempts to stop them, set to air throughout the year.

As writer Michael Price, a Simpsons alumnus, told EW.com, the series will have that familiar LEGO animation/videogame blend of franchise references and winking irreverence. The series will also introduce a new character called Jek 14, one of the Force-enhanced clones. And of course the split-persona Chancellor Palpatine/evil Sith Lord) will return.

“When I came aboard, I tried to … use my Simpsons sensibility, have some somewhat ironic fun with it, and also at the same time making it something that kids would enjoy but also their parents — who I guess I’m a substitute for that. I am a parent,” Price told EW. True Star Wars geeks should also be on the look out for more subtle gags: “We’re sort of doing this balancing act of having it be really fun and action-oriented and a lot of physical comedy, [so] some of the more insider, nerdy jokes that Star Wars fans will like are often in these sign jokes.”

Check out these exclusive images from EW.com (images © Cartoon Network).