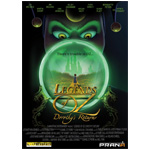 Roger S. Baum’s further adventures of his great-grandfather’s beloved characters are given a new animated life in Summertime’s Legends of Oz: Dorothy’s Return.

In the world’s supply of film-worthy fairy tales, the attempts of American authors make up but a tiny fraction. Whether the United States’ relative youth or its shocking dearth of inspiring castles is to blame, we may never know. But one classic of American literature can firmly lay claim to the title of a globally loved fairy tale: The adventures of young Dorothy Gale in the magical world of Oz.

Dorothy’s original stories were penned by L. Frank Baum, whose first novel The Wonderful Wizard of Oz became an instant classic upon its publication in 1900. Baum would eventually write 13 further books in the series, as well as the hit 1902 Broadway musical based on Wizard. After his death in 1919, a slew of authors contributed to the Oz canon (notably Ruth Plumly Thompson, who wrote 21 sequels)–but it wasn’t until the 1980s that the International Wizard of Oz Club approached children’s author (and the creator’s great-grandson) Roger Stanton Baum about penning further Oz books that the foundations of Dorothy’s new CG adventure were laid with his first effort: Dorothy of Oz.

Legends of Oz: Dorothy’s Return, Summertime Entertainment’s stereoscopic 3-D, CG-animated adaptation of the 1989 book finds Dorothy (voiced by Glee‘s Lea Michele) returning to Kansas to witness the devastation wrought by the tornado that carried her away, only to be winkled back to Oz, which is also in serious trouble. Her friends Scarecrow (Dan Aykroyd), Tin Man (Kelsey Grammer) and Cowardly Lion (Jim Belushi) have vanished, and wicked Jester (Martin Short) is scheming for control of the decaying land. En route to find her friends, Dorothy teams up with a new trio: A marshmallow man who can’t think for himself (Hugh Dancy), a bossy china doll (Megan Hilty) and a tugboat with multiple personalities (Patrick Stewart).

Ryan Carroll optioned the book about eight years ago. Growing up in Chicago, where L. Frank Baum lived and wrote his Oz stories, the producer always felt connected to these classic works, and an early penchant for art and film had him dreaming of an animated Oz from a young age.

“It’s interesting that years later, all my interests came together for this project,” he notes.

This is Carroll’s first dip into the animated sea, having worked in live-action film with his brother Roland for a number of years.

Bonne Radford, whose credits include production controller duties on the American Tail films, Who Framed Roger Rabbit and The Land Before Time as well as live-action blockbusters like the Back to the Future and Indiana Jones franchises, came aboard Legend just as development was kicking off. Being a fan of the world of Oz and especially the 1939 Judy Garland film, Radford says she was most excited by the shared enthusiasm of the crew.

“That has been a huge driving force in getting the movie to where it’s at, everyone who has come on board has a passion for it,” she says. “The artists had in their portfolios their own experimentations with Oz and what they done–it’s a place people love, and people want to participate in it.”

From Page to Screen

Carroll notes that development began–slowly, due to a raft of live-action projects on hand–about six years ago. For him, the weightiness of adapting “the original American fairy tale” meant taking as much time as possible to get it right. But once serious script development began, the indie production went forward smoothly and efficiently.

“The first thing that was really important was to get someone on board who knew what the heck they were doing,” Carroll jokes. “Bonne came on–that was the smartest choice ever, after optioning the book! I’m more of a shepherd of the project, trying to create a safe environment for Bonne and her host of talented people.”

Radford notes that the production pacing was fairly typical in her animation experience: a year for the script, another for pre-production and animatics, then three years in production.

“It’s been a moving train; an endurance run. We didn’t have any fits and starts, and we’re at the finish line!”

The crew plans to have the film completed by mid May.

The film’s stereoscopic CG animation was handled by Prana Studios, which has offices in Los Angeles and Mumbai, India. A team of 350 animators in Mumbai crafted the film using proprietary technology built off of Autodesk’s Maya. All of the design work and animatics were done in L.A. by a team of about 75 artists, not including the post-production crew. The producers note it was very important to them to have everything designed and prepped in L.A. to get the most out of the overseas animation team.

“Ultimately we decided it would offer people the most immersive experience of the world we created in stereo 3-D. Not making it gimmicky, but giving that added suspension of disbelief for the audience–allowing them to be a part of Oz.” Radford adds: “One of my criteria for animated features is that you want to go to a place that you couldn’t go to otherwise. A place as incredible as Oz, why wouldn’t you want to walk into it?”

The producers have sought to strike a balance between the imagery of the books and what visual cues audiences have come to identify with through their many adaptations, while creating something both timeless appealing to modern audiences. The team pored over descriptions in the books in addition to reflecting on the 1939 film—and made sure to avoid gadgets and gimmicks that would lock it into a specific timeframe. (So, no, Dorothy isn’t aided by Siri in her journey down the Yellow Brick Road.)

This balancing act was especially crucial to the character design, which was headed up by Ken Duncan. As Radford notes, while the books were a huge resource for what Oz should look like, people have a connection to what they have seen in previous iterations.

“We needed to be different, but didn’t want to be so different that we came 180 degrees from what people know and love,” she explains. “Dorothy is more contemporary looking, but she does wear gingham!”

In comparing Legends to past animated projects, Radford notes this is the first time she has headed an entire production from the first. In contrast to her big studio experience she found it a lot quicker to work with the pared-down executive group dictated by an indie production. The time savings in the quicker decision turn-around was very important to the project, especially working with a foreign studio.

For Carroll, the whole experience was a bit of a learning curve.

“The trick is to make it seem like you’ve gone into a real world with fully developed and dimensional characters. You don’t have a live body with sentient feelings that people get, everything has to be designed and acted and drawn. Creating the depth so the audience isn’t pulled out of the story–that’s always the challenge!”

The Sound of Magic

In addition to the venerable voice cast and experienced raft of production talent, the music of Legend is a critical aspect of the film.To honor the world’s stage and filmic legacy, the producers put a great deal of emphasis on creating a rich, distinctive and timeless soundtrack to bring Oz and its inhabitants to life.

“We were lucky Bonne introduced [music supervisor] Vicki Hiatt early in the process while we were creating the script,” says Carroll. Hiatt has supervised the music for several animated features: Open Season, Madagascar, Curious George and The Road to El Dorado. “It was important to her to make it very eclectic. We wanted a kind of Americana feel to it, but she branched off and kept everything very different at the same time.”

Radford is also proud that they were able to nod to the Oz legacy by recording at the former MGM studio where Judy Garland lay down “Somewhere Over the Rainbow”–with a 100 person orchestra, in true classic movie musical form. And not only star Lea Michele got to put her famous Glee singing chops toward the effort: all of the actors did the singing for their characters as well. Yes, even Sir Patrick Stewart.

Carroll is hoping that the timelessness, warmth and charm of the animated Oz his team has created will be a new dawn for the franchise, quite different from a certain other Oz reimaging.

“They really are apples and oranges,” the producer says of Legends and Disney’s recent Oz: The Great and Powerful. “For one, theirs is primarily live action and takes a darker tone, almost like The Dark Knight … Ours is an animated musical. Every parent and grandparent is going to take their kids to see this. We wanted to make it broad and loving. It’s a different film, a different skew of Oz, with a whole different flavor.”

Building on this new flavor, Summertime has unveiled an online virtual world based on the film (legendsofozworld.com) to further bring fans into Dorothy’s ‘adventures. Carroll has also been developing a sequel to Legends for some time, and has hopes of creating a TV series based on the film.

“We look at this as a franchise to utilized and taken advantage of on all platforms,” he says. Summertime also has a healthy slate of other IPs, both live-action and animated projects, in the works.

Carroll says it is important for the company to tap into the gaming element for Legends and its other projects, for which Summertime is seeking co-financiers and co-producers. Carroll and Radford will be on hand at the Cannes Festival and Annecy International Animation confab with Legends‘ potential in mind.

And for such a well-loved franchise, the potential on screens big and small is far from reaching its limit.

“The books are written on several different levels,” Carroll notes. “They’re great little adventure stories for kids, but as you look and read deeper into them, there are far more occult and spiritual elements that resonate with all different ages and walks of life. The truly brilliant thing about the Oz books is that you turn around and anything is possible. There’s such freedom of imagination and opportunity. It’s the American fairy tale, and that’s what America represents to me and many people around the world.”

Clarius Entertainment will release Legends of Oz: Dorothy’s Return domestically on May 2, 2014. The film will be screening privately at Cannes, and is an official selection of the Annecy film festival. Learn more at www.legendsofozmovie.com.