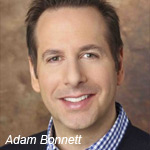 Marsh said, “Adam is an extraordinarily talented executive who brilliantly blends great storytelling with great comedy and in doing so, has helped create the #1 kids network on television. His instinct for finding and developing the nucleus of what makes great kid and family programming is unrivaled.”

Bonnett will continue to oversee all live action development and current original series and movies for Disney Channel and Disney XD as well as casting and talent relations for those channels.

Bonnett leads the programming development team responsible for developing shows such as Good Luck Charlie, Jessie, Shake It Up, Austin & Ally, and A.N.T. Farm. He also developed Disney Channel’s Dog With A Blog, as well as upcoming series Liv and Maddie and the Disney Channel movies Teen Beach Movie and Cloud 9. Among the other shows he developed at Disney over the past 16 years are Wizards of Waverly Place, Hannah Montana, The Suite Life of Zack & Cody, The Suite Life on Deck, Sonny With A Chance, That’s So Raven, Lizzie McGuire, Even Stevens and the animated hits The Proud Family and Disney’s Kim Possible.

Born and raised in Washington D.C., Bonnett earned a Bachelor of Arts degree in Cinema Studies from Tisch School of the Arts, New York University. He is based in Los Angeles, California.