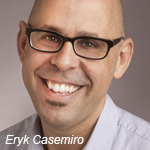 French studio Marathon Media has hired American animation veteran Eryk Casemiro as its Chief Creative Officer, Kids. Casemiro who recently relocated to Paris, reports directly to Vincent Chalvon-Demersay and David Michel, CEO and Managing Director of Marathon. He will oversee the creative aspects of all current kids productions and will lead a team of executive producers. He will be in charge of development and production opportunities for new content for children and families across all media platforms.

Casemiro is the winner of a Daytime Emmy (Rugrats, 2003) and has been nominated 11 times for his work on animated TV shows. His development experience as a studio executive, writer, creator and producer spans over 450 half-hours of television and four features. During his seven years as SVP of Creative Affairs at Klasky Csupo, Casemiro helped to launch the Rugrats movie franchises as well as several television series including The Wild Thornberrys, Rocket Power and As Told By Ginger. Since that time, he has written and produced several internationally successful television series based on beloved children’s literary properties, including Olivia, The Mr. Men Show, and Poppy Cat.

“We are extremely excited to have Eryk on board,” note Vincent Chalvon-Demersay and David Michel, CEO and Managing Director, Marathon Media. “His arrival is a logical move for Marathon Media as we are expanding our activities in L.A. with the recent greenlight of our first co-production with Nickelodeon U.S., Nickelodeon International, Gulli and Game One, Get Blake. [former working title: Blake and the Aliens].”

Marthon’s smash hit animated series Totally Spies is now in its 6th season. Marathon Media (part of the larger Zodiak Kids family] is one of France’s biggest animation producers, and one of the world’s leading cartoon studios. All of Marathon Media’s animated series have been sold in the U.S. to date.