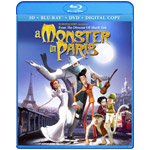 ‘Monster in Paris’ Is Unleashed on Disc Today

Bibo Bergeron’s 3-D, CG-animated feature A Monster In Paris (Un Monstre a Paris) is available on DVD and Blu-ray this week in the U.S. thanks to Shout! Factory. The imaginative, beautifully animated pic is set in Paris, circa 1910 and tells the story of a shy movie projectionist and a clever inventor who set out to capture a monster that is terrorizing the city. The monster, in turn, is in love with a beautiful cabaret singer (voiced by singer/actress Vanessa Paradis). The features songs by Paradis and Sean Lennon with a music score by popular French singer/songwriter Matthieu Chedid (aka M) and Patrice Renson.

You can read our interview with Bergeron here: www.animationmagazine.net/features/a-fin-de-siecle-fantasy-a-monster-in-paris/.

Here’s a Paris slide show from the movie:

And a clip and the trailer: