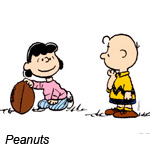 Good grief, Charlie Brown! One of the hot items announced at last week’s CinemaCon event in Las Vegas was that Fox’s upcoming Peanuts feature will definitely be CG-animated and in stereoscopic 3-D. The studio also confirmed that the film will be released in November 2015 to mark the 65th anniversary of Charles M. Schulz’s beloved comic strip. Fox’s frequent animation partner Blue Sky Studios will produce the animation and Steve Martino (Horton Hears a Who!, Ice Age: Continental Drift) is directing the effort. The Peanuts script was written by Charles Schulz’s son Craig Schulz, his grandson Bryan Schulz, and Bryan’s screenwriting partner Cornelius Uliano, and all three are also listed as producers.

Feature rights to the landmark franchise have long been unavailable, as Schultz was reluctant to grant film licenses to his characters. The highly influential strip ran from Oct. 2, 1950 to Feb. 13, 2000—just one day after Schulz died at the age of 77. Charlie Brown, Snoopy, Woodstock, Lucy, Linus, Peppermint Patty and the rest of the gang inspired a series of award-winning TV specials, including the 1965 CBS special A Charlie Brown Christmas and the 1966 offering It’s the Great Pumpkin, Charlie Brown, directed by Bill Melendez and produced by Lee Mendelson.

All we can say at this point is that we’re keeping our fingers crossed that you won’t let us down, CG-animated Charlie Brown!