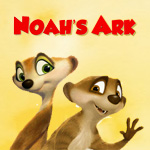 Stevenson and Hood Team Up on ‘Noah’s Ark’

Penned by Philip LaZebnik (The Prince of Egypt, Mulan, Pocahontas), the movie follows the famous Biblical tale from the point of view of the animals on the ark. A charming meerkat named Gilbert, who is chosen to lead the rag tag group of animals to the ark, is the film’s central character.

The animation for the film will be handled by Unified’s in-house animation division in Los Angeles.