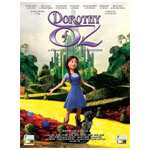 It looks like Dorothy has a new home. Summertime Entertainment’s 3D, animated feature Dorothy of Oz, which was originally slated for a 2013 release, has been renamed Legends of Oz: Dorothy’s Return and will now be released by Clarius in the first quarter of 2014, Variety reports.

The movie is inspired by a sequel to L. Frank Baum’s Wonderful Wizard of Oz and is written by his great-grandson Roger Stanton Baum. The storyline follows Dorothy (voiced by Glee’s Lea Michele) back to Kansas as she returns to find her home devastated by the famous tornado that whisked her away original. In the story, Dorothy returns to Kansas to find it devastated by the tornado that had whisked her away to Oz. The voice cast also includes Jim Belushi (Lion), Dan Aykroyd (Scarecrow), Kelsey Grammer (Tin Man) and Bernadette Peters (Glinda). Patrick Stewart, Hugh Dancy, Megan Hilty, Oliver Platt and Martin Short are voicing new characters. Canadian rocker Bryan Adams has written the film’s music. The film is directed by Daniel St. Pierre and Will Finn.

“We’re bringing Oz to a new generation while preserving and honoring the heart and soul of Oz that we all know and love — and with the musical aspect which is such an important part of that world,” Radford said.