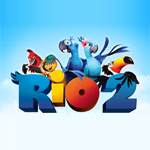 Chenoweth and Mars Flock to ‘Rio 2'

Animated by Blue Sky Studios, the sequel follows the life of Blu (Eisenberg) and Jewell (Hathaway) and their three kids and the adventures they have once Jewel decides to raise the chicks in the Amazon as free birds rather than in their current domesticated environment.

The narrative will also touch upon the 2014 FIFA World Cup, which will be hosted by Rio next year. Grammy winner Janelle Monae will also voice a character and contribute music to the sequel.