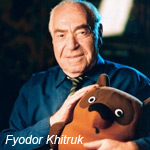 The Russian Animated Film Association announced on its website that Fyodor Khitruk, creator of the acclaimed and still beloved Vinni Puh (based on A.A. Milne’s Winnie the Pooh) cartoons and a leading innovator of Soviet animation, died Monday morning at home in Moscow at age 95.

Born in Tver, a Russian city north of Moscow, in 1917 and just months before the Bolshevik Revolution, Khitruk moved with his family to Germany in 1931, where he studied at Stuttgart Arts and Crafts College. Upon returning to the Soviet Union, he studied graphic design at OGIS College for Applied Arts in Moscow and then began working for that at the time year-old iconic animation studio SoyuzMultfilm in 1937—Khitruk had been known to say that Walt Disney’s Three Little Pigs was the film that inspired him to pursue animation.

Although his best-known work is children’s fare—including the three beloved Vinni Puh cartoons which were made between 1969 and 1972 and continue to air on Russian TV today, or Priklyucheniya Buratino (1960, Russian version of Pinocchio)—he was also highly regarded for his adult targeted films such as his bureaucratic satire The Man in the Frame (1966), philosophic pieces Island (1973) and Story of a Crime (1962), parody Film, Film, Film! (1968) and anti-war statement The Lion and the Bull (1983).

Through his long career Khitruk was honored with many state and festival awards for his work—including at the Annecy, Cannes, Tampere, Oberhausen and San Francisco film festivals, among many others. In 2008 he published the two-volume The Profession of Animation Russian guide to the artform. In his obituary, the Russian Animated Film Association referred to him as “The Teacher” for his dedication to promoting animation studies—Khitruk, joined by three other leading Soviet animators Yuriy Norshteyn, Andrey Khrzhanovsky and Eduard Nazarov, founded the SHAR Studio animation school in 1993.