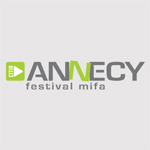 Dailymotion and the Annecy International Animation Film Festival 2013 have joined forces to launch the + de courts! – Feet in the Lake, Head in the Movies online animation contest. The top prize winner will receive a six night stay at the 2013 edition of the festival in Annecy, France taking place June 10 to 15 next year.

To enter, animators must create a short film no longer than five minutes in the vein of the theme “Feet in the lake, head in the movies” that contains the key words “International Animation Film Festival” and “Annecy 2013” and post it online on the Dailymotion Annecy Festival channel between December 20 and midnight, March 31, 2013. The 10 finalists will be chosen by online voters between April 1 and May 15, 2013. A jury of animation professionals will then select three winners from the 10 finalists between May 16-19.

The first place prize highlight is a six days and six nights stay during the 2013 Annecy Festival (June 10-15), including a round trip by plane or train to Annecy, six nights at a hotel and transportation to and from the event. First place also earns the winner Festival + MIFA accreditation, a Cristal trophy and certificate presented at the closing ceremony, winning film screened at the festival and a year’s subscription to Adobe’s Creative Cloud. Second and Third prizes get Festival + MIFA accreditation and copies of Adobe’s Photoshop Elements 11 and Adobe Premiere Elements 11.