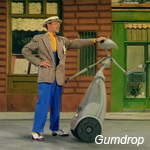 A cool new CG-augmented short titled Gumdrop premieres today (Nov. 19) on WIGS, the #1 YouTube channel for scripted drama. The short stars Gumdrop, a 27 year old Bulgarian actress who loves the Charleston, has a gift for vacuuming, has starred in films with Charlie Chaplin and Fred Astaire…and is a robot!

Created using state of the art CG technology created by concept designer Iain McCaig (The Avengers, Star Wars trilogy) and art director Venti Hristova (The Avengers, Iron Man 2), the short shows Gumdrop taking viewers on a quirky look inside a casting room as she auditions for a part and details her history as a robot actress. Gumdrop is voiced by Hristova and the short was written and directed by Kerry Conran (writer/director of Sky Captain and the World of Tomorrow) and co-directed by Stephen Lawes (creative director, Real Steel).

And now ladies and gentlemen…Gumdrop!