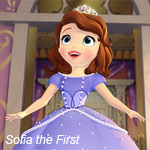 As Disney Junior prepares to welcome its first little girl princess in the lovely new CG kids’ series Sofia the First, which will launch with the TV movie Once Upon a Princess on Sunday, November 18 at 7 p.m. on Disney Channel, the Mouse House has released some super cute new clips of the music-filled homage to all things Disney Princess!

Created for kids aged 2-7 and their families, the TV special and series stars Ariel Winter (Modern Family) as Sofia, Sara Ramirez (Grey’s Anatomy), Wayne Brady (Let’s Make a Deal) and Timm Gunn (Project Runway). The special will introduce Disney’s newest TV star Sofia, an average girl whose life is suddenly transformed when her mother marries the king of Enchancia and she becomes a princess over night. With the help of several castle characters and some friendly critters, she will learn the important lessons in honestly, courage, independence, compassion and grace and what it takes to be truly royal.

Sofia the First is developed by Craig Gerber (Pixie Hollow Games) who also wrote the movie and serves as co-executive producer. Jamie Mitchell (Special Agent Oso) is executive producer and director. The show’s original music is created by songwriter/music director John Kavanaugh (Winnie the Pooh: Sprintime with Roo) and composer Kevin Kliesch (Tangled, Ever After). After debuting on Disney Channel on Nov. 18, the special will air on Disney Junior on November 22 at 9 a.m. The TV series will premiere in early 2013.