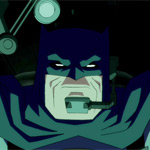 Warner Premiere has released the trailer for the upcoming direct-to-disc DC Universe Animated Original Movie Batman: The Dark Knight Returns, Part 2, MTV revealed. The film is slated to come out on Blu-ray, DVD and Digital in winter of 2013; check out the trailer below:

Based on the graphic novel by Frank Miller and directed by Jay Oliva, the saga continues with Superman (voiced by Mark Valley) being impelled to take out an aging  but still pretty butt-kicking Batman (Peter Weller) at the behest of new police commissioner Ellen Yindel (Maria Canals Barrera) who seems to think Jim Gordon (David Selby) is abetting the masked man. Voice cast will also feature Ariel Winter as Robin, Michael Emerson as the Joker, Michael Jackson (no, not that one) as Alfred, Frank Welker and Gwendoline Yeo.