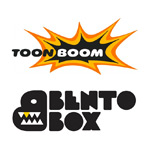 Toon Boom Animation and Bento Box Entertainment have created an exclusive and state-of-the-art digital animation production pipeline uniquely designed for Bento Box’s production on prime-time animated television series, among them Bob’s Burgers, Allen Gregory, and the upcoming new series Brickleberry, Out There, and The Awesomes. The all-digital global workflow will be promoted and available to other studios around the world that could potentially benefit from this customized methodology.

Also under the BBE and Toon Boom collaboration, four traditional animation studios in Seoul, South Korea, have been upgraded with hardware, and their workforce have been trained to use the Toon Boom suite of software tools. These will be utilized within the Bento Box digital production pipeline in order to achieve the quality and fluidity of traditional key-frame animation, while gaining significant efficiencies throughout the entire production process and enabling fluid communication and production management by BBE’s operations team in the United States.

Successfully implementing the digital pipeline and paperless workflow on prime-time animation television series is an important technological development for the industry, according to Bento Box co-founders and supervising producers Joel Kuwahara and Mark McJimsey.

“Toon Boom and Bento Box are forward-thinking companies with unique skill sets, and this pipeline we’ve developed together has created proven production efficiencies for Bento Box’s network and studio clients while maintaining and improving the highest quality of animation and acting expected by the creators, writers, artists and audiences,” says Kuwahara and McJimsey.

“We are thrilled to work with Bento Box and ensure they benefit from the utmost experience using the Toon Boom pipeline,” says Joan Vogelesang, president and chief executive officer of Toon Boom. “Both our teams have fine-tuned the digital workflow to make it a perfect fit for their needs.”

BBE is also opening an animation production service studio in Atlanta, Georgia, where it will benefit from a strong local talent pool and state and city production incentives. The new studio was created in a deal brokered by BBE co-founder Scott Greenberg. Brett Coker, head of operations for BBE, is taking charge of the project to build and launch the new facility, which will be known as Bento Box Animation Studio Atlanta LLC (“BAS”). BAS will take advantage of the Bento Box and Toon Boom production pipeline, while providing animation production services to BBE and its projects, as well as other third party producers around the world. The new studio has engaged veteran producer Craig Hartin as the head of production for BAS, as well as the services of Ashley Kohler, co-owner of Atlanta-based production company Awesome Inc., as executive in charge of production. BAS will also enter into a services relationship with Awesome Inc.

BAS will soon be providing animation production services for BBE on two high-profile television series—Out There with creator Ryan Quincy in conjunction with 20th TV for IFC, and The Awesomes with creators Seth Meyers and Michael Shoemaker in conjunction with Loren Michael’s Broadway Video for HULU. BBE’s plans to expand BAS’s production services with future projects soon to be announced.

Using the Toon Boom and BBE digital pipeline, BAS will employ over 100 animators and production staff within twelve months, and is expected to expand to greater than 200 employees within three years. Both Toon Boom and BBE will be training local artists in coordination with the city of Atlanta and the State of Georgia.