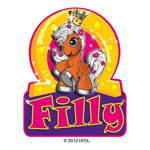 BRB and Dracco Ready to Ride with ‘Filly’

Barcelona-based BRB International and its creative studio Screen 21 are working on a new animated TV series based on Dracco’s popular toy brand Filly, which is distributed over 50 countries across Europe, North America, Latin America and Asia.

Screen 21 will produce a 3D animation series featuring the beloved Filly horses that are the brand’s emblem.

Dracco has sold over 50 million Filly toys to date, thanks to its robust licensing program around the world. Filly is the #1 toy for girls in Germany (npd), #2 in Poland and going strong across Europe, including Spain, Italy, Russia, Nordics and also in the U.S., Canada and Latin America.

The Filly television series (26×26’), which is slated for a 2014 broadcast, will tell the adventures of the beautiful Fillys in their fantasy world.

“We are embarking on this project safe in the knowledge that we are dealing with a successful brand,” says Carlos Biern, CEO at BRB International. “We are excited to develop the brand further into the audiovisual age with Dracco by applying the many facets of new technologies.”

BRB International will distribute Filly throughout the world except in Germany and will manage licensing rights in Spain and Portugal.