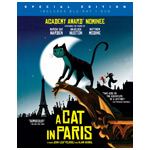 Cinedigm Entertainment Group will release GKIDS’ 2012 Oscar-nominated animated film A Cat in Paris on DVD, Blu-ray, On-Demand and Digital platforms October 9. The critically acclaimed film directed was an official selection at the Berlin, Annecy, San Francisco and Seattle film festivals and was also nominated for a 2011 César Award for its original French-language version. The DVD (SRP $29.95) and Blu-ray/DVD ($39.95) sets will feature the English language film with voice stars Marcia Gay Harden, Anjelica Huston and Matthew Modine as well as extras “The Many Lives of a Cat” Video Flipbook, “Extinction of the Saber-Toothed Housecast” animated short, U.S. film trailer and the original French version with English subtitles.

Directed by Jean-Loup Felicioli and Alain Gagnol, the animation was produced by renowned French studio Folimage. The beautifully hand-drawn film is set in the shadow-drenched alleyways of Paris, where Dino the cat lives a double life. By day, he lives with a little girl whose mother is a detective, but at night Dino sneaks out to act as accomplice to a cat burglar with a big heart who gracefully evades capture by slipping across the city rooftops.