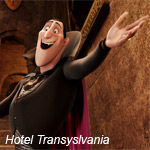 Sony’s ‘Hotel Transylvania’ Checks in at No. 1

It was a frightfully great weekend for Sony Animation’s Hotel Transylvania, which checked in at the number-one spot at the box office, with an estimated $43 million total in 3,349 theaters stateside. Directed by acclaimed TV veteran Genndy Tartakovsky (Dexter’s Laboratory, Samurai Jack) this crowd-pleasing take on popular movie monsters such as Dracula, Frankenstein and the Wolfman has also broken the all-time September theatrical openings and is the studio’s highest grossing animated movie to date. The pic should continue to deliver solid numbers through the Halloween season.

(You can read about the making of the movie here: https://www.animationmagazine.net/features/genndy-does-the-monster-mash)

Sony’s sci-fi live-action thriller Looper also had a great weekend at the No. 2 spot, making an estimated $20 million this weekend. The well-reviewed feature (93% on rottentomatoes.com) stars Joseph Gordon-Levitt, Bruce Willis and Emily Blunt.

(here’s our story about that film’s vfx: https://www.animationmagazine.net/vfx/looper-director-chats-about-films-mind-bending-vfx)

At the No. 7 spot, Disney’s re-release of Pixar’s Finding Nemo in 3-D brought in another $4 million, upping the cume to $36.5 million. The animated scene is going to get even busier next weekend (Oct. 5) when Tim Burton’s much-anticipated black-and-white, stop-motion feature Frankenweenie hits theaters. That’s right, kids! Halloween season has officially commenced.