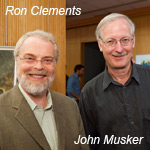 John and Ron Mention ‘The Unmentionable’

This past weekend I had the pleasure of reconnecting with Disney Animation’s legendary “John and Ron”—John Musker and Ron Clements—at a Sherlock Holmes symposium sponsored by the Baker Street Irregulars. The two were there, of course, to speak about their 1986 film The Great Mouse Detective, which was their first joint directorial effort (credited with them were Burny Mattinson and Dave Michenor).

John and Ron remain consummate raconteurs, and even have the advantage these days of elaborating on some stories that had to remain sketchy during the years when Michael Eisner (remember him?) and Jeffrey Katzenberg were calling the shots (don’t worry, Mouse, they said nothing scandalous).

Seeing the two again got me thinking about the time they told me about the factors that caused them to team up back in the mid-1980s, during a joint interview from 1997. It was borne out of one of Disney’s most notorious films: 1985’s The Black Cauldron, which was a public airing of studio growing pains and box office flop that for decades was referred to within studio as “The Unmentionable.” The two were brought in as story artists on the long, troubled production. Since John and Ron usually speak as a team, their comments really need to be presented in such a format:

Ron: “We were both sort of united on Caldron, from the standpoint that we had certain ideas for the movie that were not embraced, and we kind of became sort of…”

John: “We were the odd men out, along with a few other people who wanted the story and the characters to go in a certain way, and the people in charge didn’t see it that way. It was very frustrating.”

Ron: “We were exiled. We were basically banished from the movie.”

John: “They said, ‘You guys have a different idea, go off and do it.’”

John: “He was busy fending off a takeover.”

Ron: “He never showed up, and we became this little floating island, [wondering], ‘Does anybody know that we’re here?’ Finally, Michael Eisner came, and Jeffrey Katzenberg, and Roy Disney came back, and we had to pitch our Great Mouse idea to them as if it were a brand new project, even though we’d been working on it for a year and a half. They liked it and wanted to do it.”

As everyone knows, Ron Miller got pasture-ized, while John and Ron were promoted into the director’s chair for The Great Mouse Detective, which for them was just the beginning: their next project, The Little Mermaid, put Disney back on top in terms of animation. And in an era when feature animation is increasingly being created by committee, and director’s chairs more closely resemble revolving doors, John Musker and Ron Clements remain a creative team force to be reckoned with.