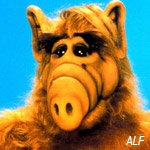 The Alien Life Form from the planet Melmac is plotting a comeback.

Sony Pictures Animation has acquired the rights to ALF, the iconic 1980s sitcom about a wisecracking alien who lives with a typical suburban family, according to The Hollywood Reporter. Plans are for the studio to develop ALF into a hybrid CG-animation/live-action feature film, a la The Smurfs.

Smurfs producer Jordan Kerner will produce the movie with the original show’s creators, Tom Patchett and puppeteer Paul Fusco. Fusco also did the voice for the character, and is expected to reprise that role for the feature.

Ben Haber of Kerner Entertainment Co. and Kenneth Kaufman will serve as executive producer. A writer and director are yet to be hired.

Kerner and SPA just wrapped production on The Smurfs 2, which has a release date of July 31, 2013.