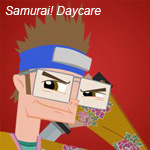 Pipsqueak Films’ new animated series Samurai! Daycare has made a big impression on YouTube. Created by Disney veteran and Emmy nominee Mike Blum (The Adventures of Baxter and McGuire, The Zit), Samurai! Daycare debuted on August 9 on Smosh’s Shut Up! Cartoons channel and has generated 250,000 views in less than five days.

Shut Up! Cartoons, the animation channel launched by YouTube chart leader Smosh has attracted over 612,000 subscribers (with over 49.3 million views) since it went live on April 30. Smosh, which was acquired by Alloy Digital last year, is also the third-most subscribed-to YouTube channel.

In its first week, Shut Up! Cartoons was #1 for subscriber gains and continues to rank Top 3 for weekly views among the original channels, according to current VidstatsX. The channel has quickly catapulted to #205 in the YouTube universe.

Check out the first episode of Samurai! Daycare: