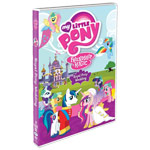 Dr. Seuss’ The Lorax, a hit at the box office for Universal and Illumination Entertainment, arrives on home video ahead of a strong pack of animated and VFX releases that includes a favorite among the Bronies tribe.

Directed by Chris Renaud (of Despicable Me fame), The Lorax (Universal, $29.98 DVD; $34.98 Blu-ray and DVD; $49.98 3D Blu-ray, Blu-ray and DVD) grossed $331 million worldwide at the box office. Adapted from the famous children’s author’s environmental fable, the movie features the voices of Danny DeVito, Zac Efron, Ed Helms, Rob Riggle, Taylor Swift and Betty White. Animation on the film was done by Illumination Mac Guff in Paris, and the home video release features three new shorts based on the main feature.

Bronies are sure to have pre-ordered My Little Pony: Friendship is Magic — Royal Pony Wedding (Shout! Factory, $14.97). The disc collects five episodes of the hit series, including the two-part “A Canterlot Wedding.” In something of a similar vein, this weke also sees the release of Winx Club: The Secret of the Lost Kingdom Movie (Nickelodeon, $16.99).

Warner Bros. offers a mix of the old and the new, with The Looney Tunes Show: There Goes the Neighborhood (Warner Bros., $19.97), the most-recent offering from the current Cartoon Network hit; as well as Squidbillies, Vol. 5 (Warner Bros., $19.97) from the Adult Swim side of the aisle. Fans getting a little long in the tooth may also be tempted to relive the Saturday mornings of their childhood by ordering The Amazing Chan and the Chan Clan (Warner Archive, $39.99) from the studio’s on-demand video service.

Superhero fans can add the anime takes on their favorite Marvel heroes to their collections with the releases of Marvel Animated Series: Iron Man Vols. 1 and 2 (Sony, $14.99 each) and Marvel Animated Series: X-Men Vols. 1 and 2 (Sony, $14.99 each). Fans of homegrown anime titles will be down for One Piece: Season 4, Voyage One (FUNimation, $39.98).