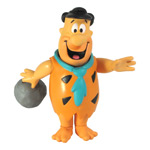 “We are delighted to add Hanna-Barbera to our portfolio of licenses, and to create figures and plush based on some of the most well-known cartoon characters of all time,” said Laura Zebersky, executive vice president global sales, Jazwares. “Hanna-Barbera shows are iconic, and resonate with consumers of all ages. We’re sure that fans and collectors alike will be excited to see their favorite retro series, like The Flintstones and The Jetsons, brought back to life in the toy aisle.”