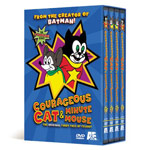 Evergreen Media Group is working on a live-action/CG hybrid adaptation of Courageous Cat, an animated 60s cartoon by Bob Kane, who was also the creator of Batman. Courageous Cat is one of only two properties that were originated by Kane that are not owned by DC Comics and Warner Brothers.

Evergreen is prepping a contemporary live action/CGI feature film with a reimagined mythology for Courageous Cat. The original Courageous Cat cartoon series was syndicated by Telefeatures and created by Kane as a parody of his earlier work Batman and in many ways predicts the more campy aspects of the later live action series.

“We are very excited to have been granted the rights to this beloved masterpiece,” said exec producer Tony DeRosa-Grund (Josie and the Pussycats, Sabrina the Teenage Witch). “Courageous Cat has an amazing pedigree – no pun intended – coming from the lineage of great properties created by Bob Kane. We look forward to bringing Courageous Cat to a whole new generation of fans.”

“For years we resisted overtures for the property,” said Debbie Litt, Director of Telefeatures. “However, because of Tony and Evergreen’s longstanding track record of finding great new takes to reboot classic properties we had a significant comfort level in entrusting them with Courageous Cat.”