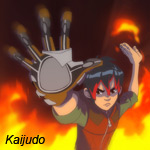 Kaijudo, The Hub’s new incarnation of Duel Masters, brings a sense of emotional maturity and artistic integrity to the classic property.

It certainly looks like The Hub has quickly become the go-to destination to bring older brands to dynamic new life. After having great success with rebooting shows such as G.I. Joe, My Little Pony, Pound Puppies and Transformers, the year-and-a-half-old cabler just re-introduced the Duel Masters franchise last month. Produced by Hasbro Studios in conjunction with Wizards of the Coast and MOI Animation, the new reboot is called Kaijudo: Rise of the Duel Masters and it follows the adventures of a 14-year-old boy (voiced by Scott Wolf) who has a rare talent to befriend and fight alongside fantastical creatures from a parallel dimension.

“We wanted to come up with a concept where the magical creatures didn’t have to be pulled out of a card,” says Andrew Robinson (Transformers Prime, Young Justice, Green Lantern: The Animated Series), who is Kaijudu’s show runner with Henry Gilroy (Star Wars: The Clone Wars, Voltron Force). “When you have living, breathing creatures who are actually characters you have a much more satisfying, dramatic mix and you can tell much better stories. What if these mysterious characters like the Loch Ness Monster and Big Foot have a basis in a different reality? What’s their secret history?”

Gilroy adds, “Of course, we wanted to be true to the origins of the property and do the brand justice. Throughout the show, there’s this bridge between the two versions of the brand. But we don’t really need to have the cards in the show thanks to the magical way the creatures are summoned from another world.”

The show’s writers, who have had long and impressive careers in TV animation, were also quite emphatic about making the series something more than a constant chronicle of the fight between the good guys and the bad ones.

“Our hero has a lot of empathy for the creatures,” says Robinson. “Thematically, underneath the magic of exploring these worlds, we also built this resonant theme of fighting bullying. The bad guys are bullies who force these creatures to fight and our heroes rely on compassion to help them.”

For art director David Colman (Class of 3000, The Cleveland Show), the show provided an excellent opportunity to revisit the beautifully illustrated cards of the original property and create a world that lent itself better to a weekly animated show.

“This is my first boys’ action series, and I welcomed the chance to create a whole new world without losing the integrity of the subject,” he explains. “It was important for me to maintain the same aesthetic, but we also created many new original characters—that was my sandbox! These worlds don’t exist in the card games, so the look was wide open. I came up with shape languages for each realm, based on the philosophies that Andrew and Henry gave me.”

To come up with the overall visuals of the series, Colman found inspiration in French animation and comic-books and the work of Jamie Hewlett (Gorillaz).

“I am proud of the way we were able to create a sense of personality and emotional life for all the characters, even the monsters. We wanted our audience to develop compassion and understand different species and inspire them to look at nature and other civilizations differently. The creatures are based on real things, in principle, but we’re taking them and turning them on their side.”

The producers also praise Korean animation studio MOI, which has helped them produce the striking show.

“They also worked on G.I. Joe and Young Justice,” say Gilroy. “We had an excellent working model as we included them in the pre-production process. We actually brought MOI in to do some production design for us. They are making us look good.”

“They have great chemistry across the board, and watching them bring the show’s mythology to life has been fantastic,” he notes. “Add that to the emotional integrity of the storylines, and you can see why we are very proud of what we’ve accomplished with this new world of Duel Masters.”