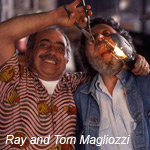 The Tooning Up of ‘Car Talk’

Here’s a pop-quiz for pop culture geeks: what do Jack Benny, Abbott and Costello, and Click and Clack, the Tappet Brothers, from NPR’s Car Talk, all have in common? Give up? They all started out as radio stars, and at one point or other they were transformed into cartoon form; Benny in Robert McKimson’s The Mouse that Jack Built, Bud and Lou (at least Bud; Lou had died) in Hanna-Barbera’s eponymous TV toon series in the 1960s. The Tappets—a.k.a. Ray and Tom Magliozzi—not only had cameos in Cars, they starred in their own short-lived 2008 series for PBS, Click and Clack’s As the Wrench Turns.

The recent announcement that the Magliozzi brothers were retiring from the weekly radio call-in program they’ve hosted for 35 years resulted in widespread press mentions of their cartoon spin-off; unfortunately, they were dismissals of the series. The fact that spontaneity is a much harder quality to achieve in animation than it is by simply sticking a couple of cut-ups behind a microphone seemed to be beside the point as one journalist after another dug up old, very tepid reviews of the series.

Reading this, I felt that someone should to stick up for As the Wrench Turns, which I thought at the time was pretty funny. It certainly came with a pedigreed team of creators: Bill Kroyer, Tom Sito, Floyd Norman, Tom Minton, Karen Johnson and Stephen Silver. Most notably, it was perhaps the first series ever to be done in Flash animation that didn’t end up looking like flush animation. If there was an obstacle, it was that between the National Public Radio home of the original, and the public television venue for the series—PBS’s first primetime toon—vast sums of money were not spent. “We could only afford to do ten seconds more than the legal length of the show,” Bill Kroyer, who served as exec producer of animation for the series, told me in 2008. He elaborated:

“You look at a show like The Simpsons and go through their production pipeline and see how many storyboard revisions and story reel revisions there were, and how many times the animation is revised. In Car Talk [As the Wrench Turns], we had one shot at every step. We had one script, which we did revisions on, and then had our rewrite. We could afford one board revision with our board artists, and we put it up on reels, and had then had a breakneck pace to get all the reels up and edited. We really had time to do just one pass, then we’d send it to Atomic [Cartoons, in Vancouver], and they’d send us one animation pass. We’d go through that and make our notes, and they’d give us a second one. Then I’d go up and edit. I’ve never worked on a show that had to go so straight through.”

What was not mentioned in the press—because it’s never been revealed (until now)—was that the producers were seeking Al Gore for a guest appearance in an ecological-themed episode. Gore opted to accept the Nobel Peace Prize instead.