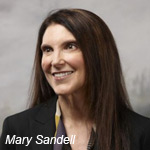 “Both a standard-bearer for business and a champion of artists, Mary is that rare creative executive who fully earns the title,” said LAIKA CEO and president Travis Knight. “Her ferocious intellect, tireless work ethic, and intense passion for animation make Mary Sandell the perfect partner to move LAIKA’s film slate from shadowy notions to fully realized works of art.”

LAIKA’s next feature is the much-anticipated ParaNorman, which will be released by Focus Features on Aug. 17. The company recently optioned the Scholastic novel Goblins by Philip Reeve with Mark Gustafson attached to direct.