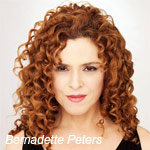 After her successful appearances on NBC’s Smash and Broadway’s Follies, actress Bernadette Peters is joining the voice of Summertime Entertainment’s upcoming 3D animated movie Dorothy of Oz. Peters will be voicing Glinda the Good Witch and sing a duet on the film’s soundtrack with Lea Michele (Glee) who is voicing Dorothy in the movie.

In addition to Michele, the film features the voices of Patrick Stewart, Hugh Dancy, Bernadette Peters and Megan Hilty. Bryan Adams, Tift Merrit, Jim Vallance and Jim Dooley provide the film’s music the. The 3-D CG animation is produced by Summertime Entertainment (Alpine) and was originally slated to be in theaters this summer.

This is not Peters’ first appearance in an animated project. The multi-talented actress has voiced characters for TV shows such as Animaniacs and Teacher’s Pet and the movies Anastasia and The Land Before Time X.